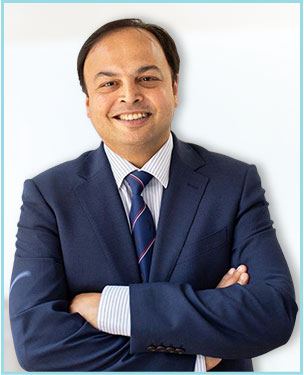 Mr. Parijat Bhattacharjee (Consultant Gynaecologist & Obstetrician) had further trained as a Clinical Research Fellow for two years at The Early pregnancy, Gynaecology Ultrasound and Minimal Access Surgery unit at St. George’s Hospital, London and as a Senior trainee at the Minimal Access Therapy unit at the Royal Free Hospital. He also trained in the management of Infertile couples at the Reproductive Medicine Unit (now, The Centre for Reproductive and Genetic Health) at University College Hospital London.

He has trained in all aspects of Laparoscopic and Hysteroscopic surgery including Hysterectomy, endometrial ablation for abnormal bleeding, fibroid removal, ovarian cyst excision, treatment of endometriosis for management of infertility or pelvic pain. He trains in various Minimal Access Surgery & Ultrasound courses including RCOG (Royal College of Obstetrics & Gynaecology), BSGE (British Society of Gynaecological Endoscopy) & ISRSFT (International Society of Reproductive Surgery & Fallopian Tubes). He has Royal College of Obstetrician and Gynaecologists (R.C.O.G.) Advanced Skills accreditation in Laparoscopic and Hysteroscopic surgery and Gynaecology (and Early pregnancy) scanning.

He offers specialist treatment in Gynaecology ultrasound and Early pregnancy problems including recurrent and late miscarriages, poor obstetric history, ectopic pregnancies and in One – stop Gynaecology clinics , particularly for pelvic pain and irregular or heavy vaginal bleeding including fibroids, ovarian cysts and endometriosis. He provides his expertise in ultrasound scan at the initial clinic consultation and provides a comprehensive treatment and follow up including surgery, if necessary. He was involved in the ovarian cancer screening programme at St. George’s Hospital and ultrasound and hysteroscopic assessment in peri and postmenopausal bleeding.

Reviewer of abstracts for the journal, 'Cureus'

He has been on the editorial board for abstracts / presentations for RCOG world congress 2014 (Hyderabad, India) & 2020 (Muscat, Oman) and on the panel for setting up a question bank for MICOG examinations.

He is the Joint editor of the Newsletter of the International Society of Reproductive Surgery (ISRS). Parijat is on the Editorial board of the BMUS journal, Ultrasound (2018 - 2020).

He is the Lead in Research in his department at London North West University Hospitals and is conducting multiple national and international studies.

He has co-authored a book on MRCOG examinations.

He is a reviewer of abstracts of the British Medical Journal.

Mr. Bhattacharjee is actively engaged in research and teaching.

He is a trainer & Faculty for the MRCOG courses of the RCOG.

He is Examiner of MRCOG examinations of the RCOG.

He is a Faculty of RCOG/ BSGE courses in Hysteroscopy & Laparoscopy

He teaches (Faculty) in Advanced Ultrasound & Reproductive Surgery of ISRSFT

He is a trainer for MRCOG examinations in the Enhanced Learning Programme by the Royal College of Obstetrician & Gynaecologists, UK.

He is a member of the DRCOG examination subcommittee of the RCOG.

He trains postgraduate trainees for RCOG Advanced skills modules in Laparoscopic and Hysteroscopic surgery and in Gynaecology ultrasound.

He is also a Faculty of the WHO / RCOG / LSTM courses for Life Saving Skills to reduce Maternal and Infant mortality and travels overseas extensively to lecture and train trainees in Obstetrics & Gynaecology and Midwifery.

SOME OF HIS PUBLICATIONS AND PRESENTATIONS: